Southeast Alaska encompasses the 17 million acre Tongass National Forest. Together with the coastal old-growth forests of British Columbia, this is the largest temperate rainforest ecosystem in the world.

The Panhandle is a complex mosaic of mountains, valleys, bays and inlets, and about 5,000 islands called the Alexander Archipelago. When the entire convoluted coast is measured, Southeast Alaska has more than 18,000 miles of shoreline.

Cool, saturated air from the North Pacific creates a moderate maritime climate with abundant rainfall, averaging more than 100 inches per year. Remarkably, the Panhandle has over 350,000 acres of tidal estuaries, where voluminous runoff carrying nutrients from the land mixes with powerful oceanic tides that are rich in marine nutrients. Estuaries are also the ecological link for species that move between rivers and the sea. All of this adds up to an extraordinarily productive ecosystem.

Semi-enclosed by land, the whole Panhandle archipelago represents a single estuarine system that ranks among the largest and most complex in the world. This nutrient rich environment is the preeminent feature of the region, supporting an abundance of animal and plant life, including one of the planet’s most prolific wild salmon ecosystems.

The waters close to shore are also essential for commercially valuable shellfish. And few people realize that fish caught far out at sea—such as rockfish and black cod—spend their early lives growing in the nearshore waters and bays of Southeast Alaska. Eelgrass beds are an especially important part of this nursery habitat, and remarkably, the Panhandle has more eelgrass beds than Washington, Oregon, and California combined. 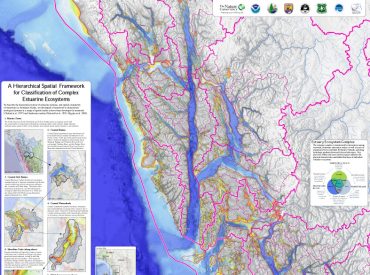 No more articles to load